Our latest grads began training in August 2021 and worked in teams to build full stack applications.

"In the last six months, they've been introduced to a wealth of information in their journey of becoming software engineers. They started their journey by learning how to collaborate with team members in coding environments using Git, terminals, and VSCode.

They've been shown what makes up the foundations of the Internet from the standards that facilitate communications, like TCP and HTTP, to the architecture of a full stack web application. They've seen how information can be saved in databases by learning SQL and how those databases actually work under the hood. They've also seen how users interact with websites through interfaces built using HTML, CSS, and JavaScript. They've been shown how to use libraries like React and Redux, and how that can help them organize and structure their front end applications. They know how to write clean, well-tested code using frameworks like Gist and libraries like Mock Service Worker.

But most importantly, they've learned how to organize and collaborate on shared ideas in code through a series of group projects. So needless to say these students have spent a significant amount of time learning how to walk the walk of a software engineer."

For their last projects before graduation, they worked in small teams for a two-week sprint. Each team chose their own style of planning and collaboration, using tools like Miro and Figma, and combining all the technologies they've learned so far.

Scroll down to learn more about each of these software developers and see the apps they built together (or view the list on GitHub).

NoshBook is an app for discovering, collecting, customizing, and creating recipes. Not only can you generate a shopping list based on recipes you've selected for the week, but duplicate ingredients will be flagged and you can search within the list. The team spent time building features like recipe rating and making search intuitive using Elasticsearch, incorporating motion into their styling for a seamless in-app experience, and data munging so they could parse ingredient data from different sources. 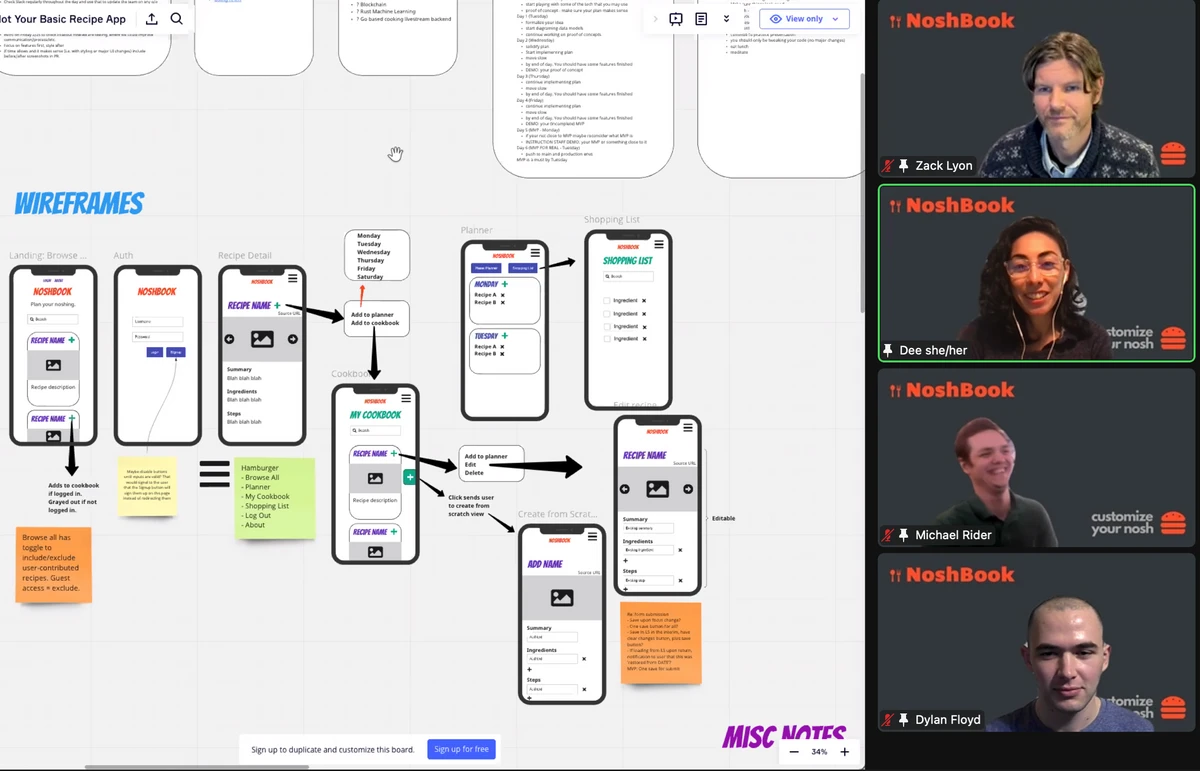 This software engineering team came up with their project idea because they saw a need for an online space that is both as social as Twitter and as useful for problem-solving and learning as Stack Overflow. They created Code.Pals as a safe place (no clutter, ads, or distractions) for coders to go and post questions, and start new projects. It includes message board, posting, and chat messaging functionality. 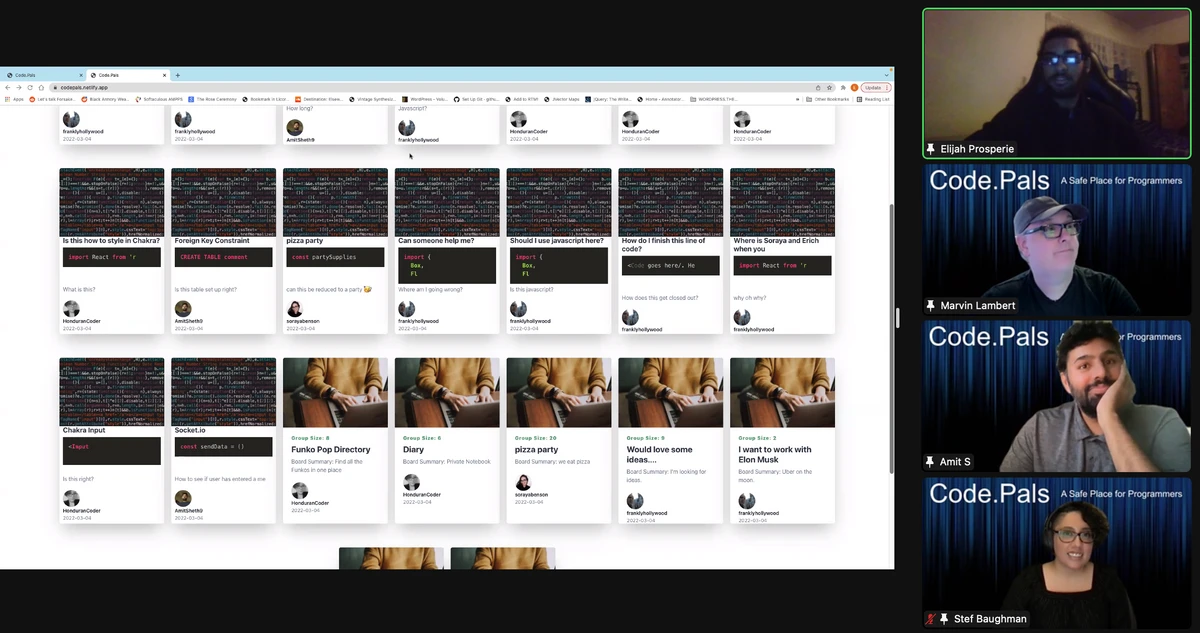 Bop Simon is musical memory game inspired by Simon Says meets the Bop It! game of the 90s. Play the game by repeating the melodies played on a colorful keyboard of hexagons, built with the Tone.js library. Players can also create a profile, and enter free play mode to play melodies without worrying about whether their human memory can beat the CPU! 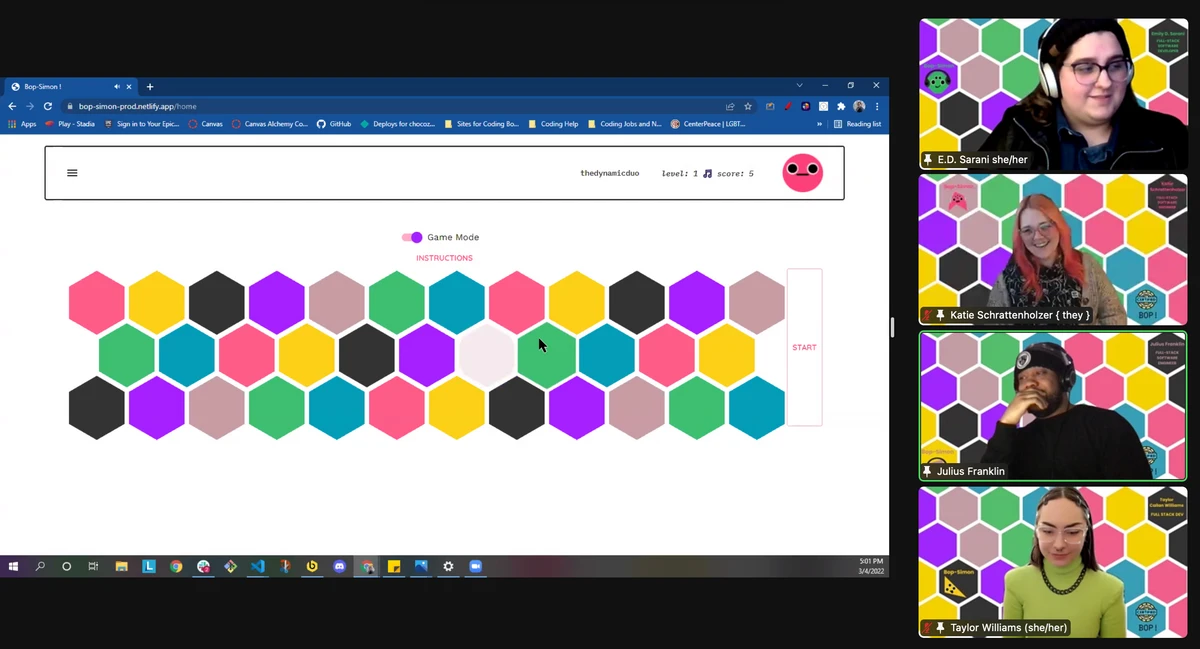 Two-person team Karl and Dano combined their design, backend, and Typescript superpowers to develop Bark Base. This application keeps track of your pet's health information and key contacts. Forms allow you to add and edit custom information for your pet. It also includes training and pet facts, helpful resources to be the best pet parent possible.

For hiring talent, program inquiries or career openings, please email us here. We look forward to connecting with you!